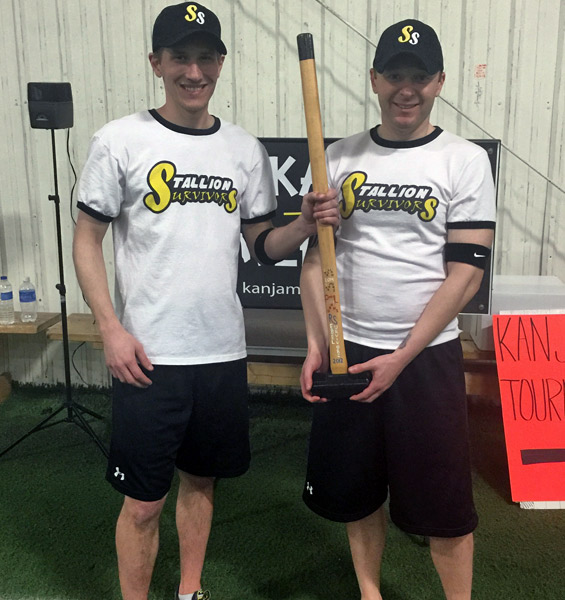 Largest Klassic to date won by the defending champs

The 2015 KanJam Klassic took place on Saturday, April 25th. For the first time in over 10 years, the tournament returned to where it all started, Sportsplex in North Tonawanda, NY. With a total of 33 teams and players traveling from as far as Pennsylvania, Maryland, Ontario, and Florida, this marked the largest and most widespread Klassic to date.

With just one loss from the Regular Season at 15-1, defending Klassic champions Stallion Survivors (Eric Klavoon & Jon Sandino) took down some talented teams to advance to the Finals, including a very close Game 7 triple overtime win against Da Bubs in the Divisional Semi-Finals. They met up with PHILorkus (Josh Greenauer & Phil Schneider), 2013 Klassic Champions, in the Finals, where they went on to win the series four games to one to capture their second straight Klassic title.

Ties decided by head-to-head play and shootouts.
The top 12 teams from this division qualified for the playoffs.

Ties decided by head-to-head play and shootouts.
The top 12 teams from this division qualified for the playoffs.

As with each passing year, the Klassic continues to draw in top teams, including those that regularly participate in the KanJam World Championship. This would set up another competitive route to the Klassic title. With a record number of teams for this indoor major KanJam tournament, the field of teams was randomly divided into two divisions, similar to the Klassic two years prior (2013). The Dinger Division (Red) consisted of a total of 17 teams, while the Deuce Division had a total of 16 teams. Teams would play every team one full game to 21 points within their division only.

The top 12 teams from each division made the playoffs, with the top four earning a bye for the first round. In the Dinger Division, Matteson Brothers (Austin Matteson & Connor Matteson) made KanJam history, becoming the first team ever in a KanJam major tournament to post an undefeated record in regular season play, going a perfect 17-0 to claim the #1 seed. The young upstarts also won the highlight game from the regular season, defeating PHILorkus in a six overtime round game. PHILorkus (Josh Greenauer, 5-time Klassic Champion & Phil Schneider) took #2 at 15-2, while Nacho y Esqueleto (Erik Arneth & Evan Sardo) were #3 (14-3) and three-time Klassic finalists, Little Lebowski Urban Achievers (Mark Stein & Jackson Trinh) earned the final bye spot at #4 (13-4).

In the Deuce Division, defending Klassic Champions, Stallion Survivors earned the #1 seed at 15-1, losing their only game to Barrel Roll. Serenity Now! (Tim Klavoon & Dan Klavoon, 3-time Klassic Champion) went 13-3 for the #2 seed. Three teams tied at 11-5 and had each split their head to head games, setting up a three-way tiebreaker shootout to determine which teams would earn the final two bye spots. Each team took a court and threw three rounds of throws. In their return to the Klassic, Milo's Minions (Adam Williams & Nate Schutt, 2011 Klassic finalists) recorded 14 points in the shootout, claiming the #3 seed. Barrel Roll (George Carvell & Zach Mayer) outshot Daddy DayKare (Matt Lafferty & Trevor Trethewey) 12 to 11 to get the final bye and #4 seed. 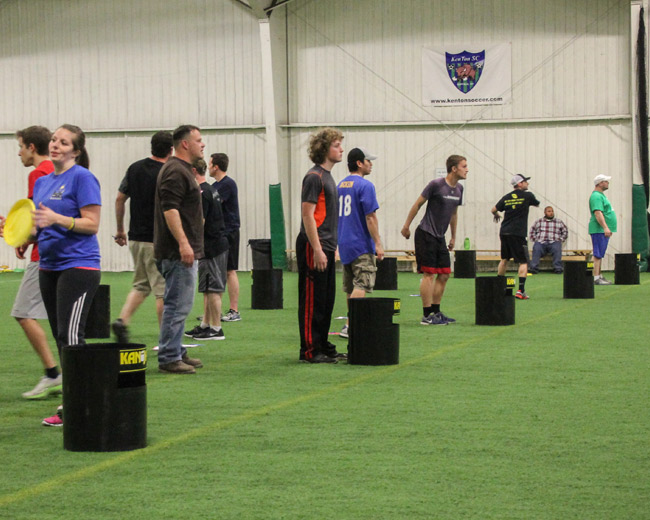 A three-way tie at 11-6 set up another shootout in the Dinger Division for 7th place. Jamaican Jerks (Bob Greenauer, 4-time Klassic Champion & Scott Silverman) ended on top with 12 points in the shootout, with Slackers (Jim Daugherty & Kim Klavoon, 2007 Klassic finalists) to follow at 11 points for the #8 seed, and The AmeriKAN & The MexiKAN (Ivan Gonzalez & Jarrett Tootle) taking the #9 seed after getting nine points.

Both divisions had a shootout battle to determine the final playoff spots since head-to-head record was locked in a tie. In the Dinger Division, three teams tied at 6-11, with only two of them able to get in the playoffs. 716 Kan-nection (Adam Gibson & Michael Nowakowski) took the #11 seed after they scored nine points in the shootout. The other two teams, Booker, please (Doug Stone & Brian Cadwallader) and High Voltage (Chris Southwick & Gabe Southwick) each shot eight points, setting up one more additional round to break the tie. Booker, please won by a score of four to two, ultimately landing the final playoff spot in the Dinger Division.

Divisional Wild Card Round (best of 5) - After the Regular Season concluded and all the shootout tiebreakers were decided, a playoff bracket was set up for each division. Mirroring the format for the World Championship, the top seed would play the bottom seed throughout the playoffs. Once it came down to one winner from each division, those teams would square off to determine a Klassic Champion.

With the top four teams sitting out for the first round, seeds #5-#12 competed in the Divisional Wild Card Round. This was a best of five series. In the Dinger Division, all the higher seeds won their matches, with the first three matches as 3-0 sweeps. What's the big deal (#5, Brian Schultz & Matt Nelson, 2014 Klassic finalist) defeated Booker, please (#12). SIX IT (#6, Lenny Feldman & Sam Caquias) took down 716 Kan-nection (#11), while Jamaican Jerks (#7) won their series against The Benchwarmers (#10, David Morrison & Marcus Middleton). And in the only series that wasn't a sweep, Slackers (#8) defeated The AmeriKAN & The MexiKAN (#9), three games to one. 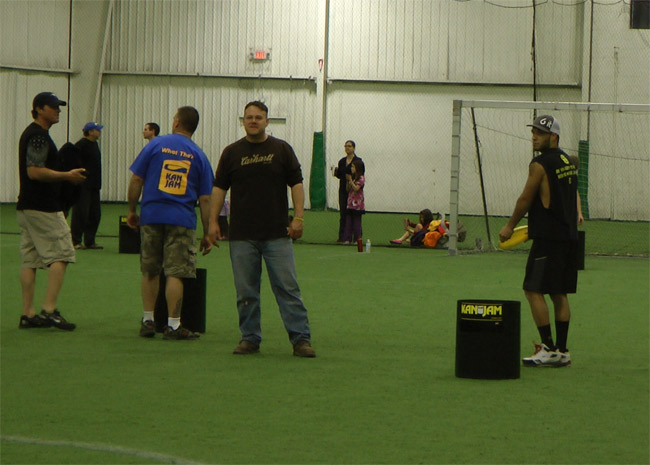 Divisional Quarter-Finals (best of 7) - The top four bye teams entered playoff action in round two, facing the winners from the Wild Card Round. All remaining playoff series would be best of 7 matches. In a Final 4 rematch from last year's World Championship, Stallion Survivors (#1) defeated 10-13 (#10), 4-1 in the Deuce Division. Serenity Now! (#2) eliminated Kool aid jammers (#8) in a close series, 4-3. Da Bubs (#6) continued their hot streak, sweeping their second straight playoff series 4-0, against Milo's Minions (#3). And in the final series, Barrel Roll (#4) knocked out Daddy DayKare (#5), 4-0. 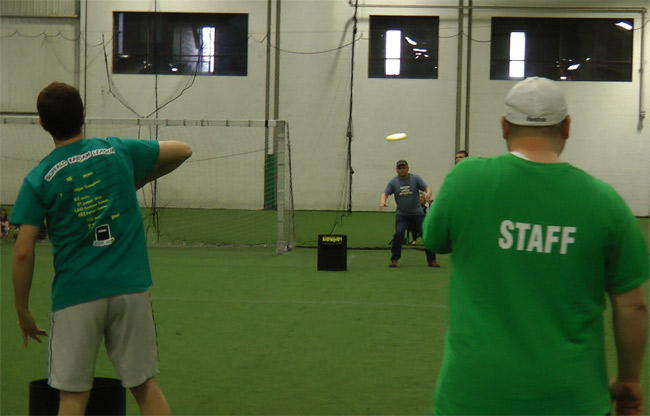 Over in the Dinger Division, all series were relatively close, with all matches going to at least game 6. While #8 seed Slackers threw a timely Instant Win on the last throw of a game against #1 seed Matteson Brothers early in the series, Matteson Brothers prevailed by winning the series 4-2 to advance. PHILorkus (#2) took on Jamaican Jerks (#7) in one of the most epic series of the tournament. The series went the distance to game 7, with all but one game going to overtime. Here is a quick recap of the series: 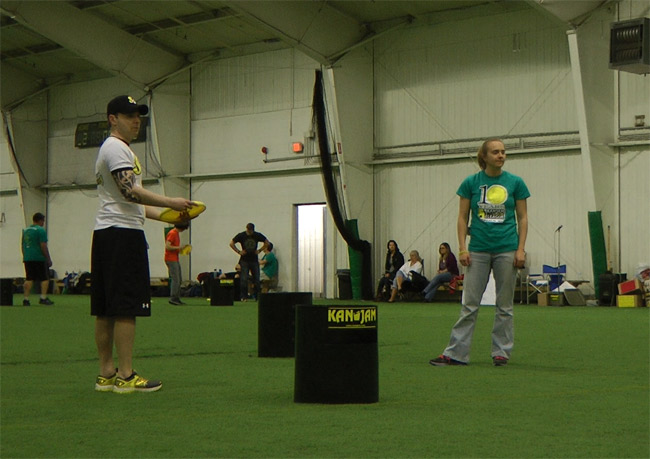 Divisional Semi-Finals (best of 7) - With just four teams left in each division, the competition was heating up in the Divisional Semi-Finals. Matteson Brothers (#1) battled with Little Lebowski Urban Achievers (#4), eventually winning a very close series, 4-3 to continue on in the Dinger Division. In the other series, PHILorkus (#2) took down Nacho y Esqueleto (#3), 4-1. 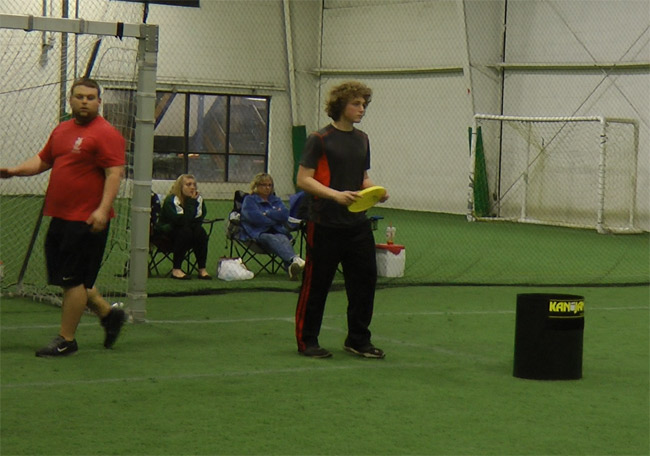 Stallion Survivors (#1) took on Barrel Roll (#4) in the Deuce Division Finals. After losing the first game, Stallion Survivors won the next four games to clinch the series 4-1, advancing to the Klassic Finals for the second straight year. 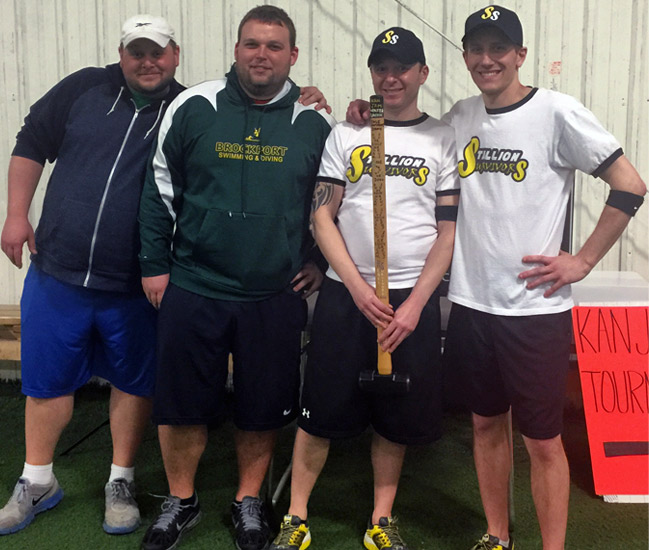 Game 2 - Stallion Survivors went perfect to 15, before missing, taking a 15-10 lead. They then closed out at 21-12 on a great tip by Jon Sandino, making PHILorkus attempt another Instant Win. Unable to get it, PHILorkus trailed 2-0 in the series heading into Game 3. 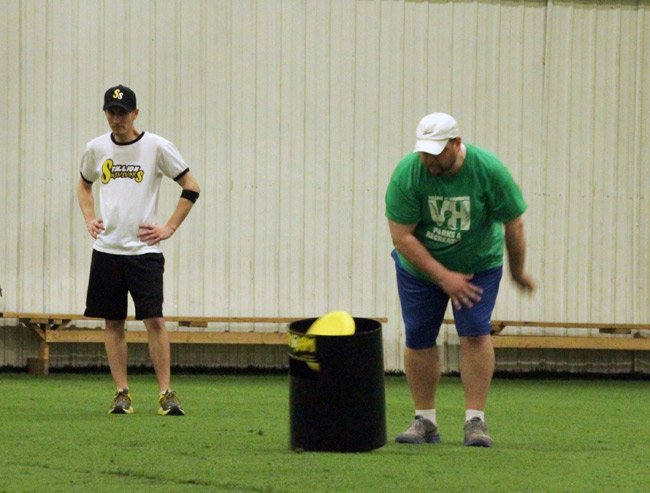 Josh Greenauer (PHILorkus) makes a bucket in a Finals game

Game 4 - PHILorkus rebounded to take a 12-10 lead on a great slam bucket by Phil Schneider. They would go up 18-16, forcing Stallion Survivors to convert five points. With only point on the first throw, Stallion Survivors threw for an Instant Win and did not get it. PHILorkus shot the last bucket to complete the perfect game and trailed the series now 3-1.

Game 5 - Stallion Survivors tied the game at 6-6 on two great slams to keep pace. They then went ahead perfect to 18. Trailing 20-18 but with The Hammer, Stallion Survivors needed just a bucket to capture the series. On the first throw, Eric Klavoon slammed the final bucket to complete the perfect game and win the series four games to one. 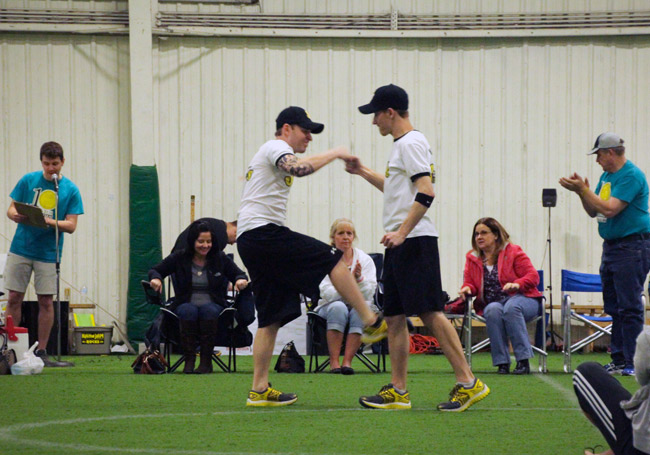 Stallion Survivors celebrated in becoming the 2015 KanJam Klassic Champions, with high fives all around for both teams. In doing so, they become the fourth different team to win back-to-back Klassic titles. As a team, Stallion Survivors have won all three major tournaments they have competed in, posting an overall Finals record of 12-1 in all three tournaments (2014 & 2015 Klassic and 2014 World Championship). For Eric Klavoon, this marks his 7th Klassic title, which is the most of any player. It was quite a display in the Finals for both teams, and hats off to PHILorkus for another great performance.

As tradition, the main prize for this tournament has always been "The Hammer" trophy, as the team that wins gets to carve their team name and year onto the handle. They are also responsible for bringing The Hammer back to next year's Klassic. With being crowned as official 2015 KanJam Klassic Champions, Stallion Survivors were presented with The Hammer. The top four teams were also awarded with prizes (see below). In addition, for everyone remaining at the conclusion of the Finals, there was also a random drawing of multiple prizes (choice from either the prize table or from an assortment of gift cards). 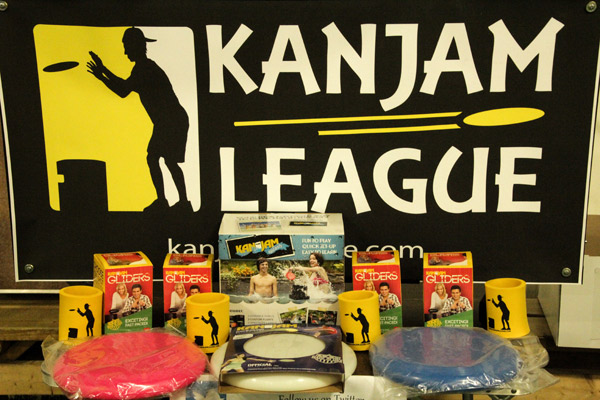 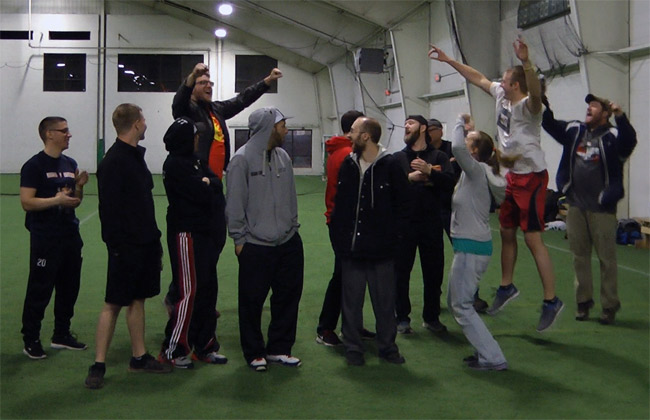 As always, we want to send out a thank you to all participating teams that traveled from near and far to compete in this annual tradition. Without their dedication, this tournament would not be possible. Also, special thanks to everyone that helped with tournament setup, takedown, and announcements. All proceeds were donated to "Carly's Club" at Roswell Park Cancer Institute. Visit www.carlysclub.org for more information regarding this charity. Thank you to Sportsplex for coordinating the field rental and working with us to set up the tournament. We look forward to seeing everyone one again at next year's Klassic.