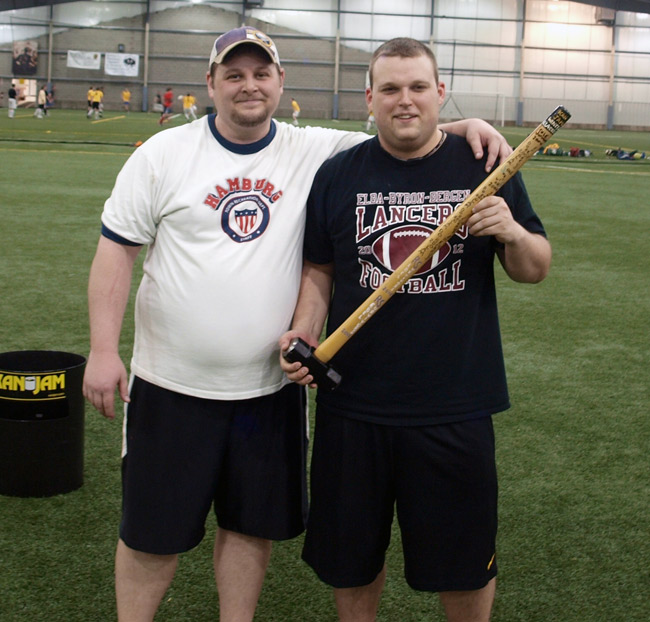 For the second year in a row, exactly 32 teams competed on the indoor soccer field at Sahlen Sports Park in Elma, NY in the 2013 KanJam Klassic. This was the 10th annual tournament.

In what will go down as one of the most competitive tournaments yet, the 2013 KanJam Klassic featured some of the wildest and memorable playoff series ever. In the end, PHILorkus, composed of Josh Greenauer and Phil Schneider, made an exciting come from behind win in the Finals against The Italian Stallions (Brian Ellis & Jon Sandino). After trailing in the best of seven series 3-0, PHILorkus won four straight games to pull off an incredible tournament victory. This was the first ever hammer for Phil Schneider, who had previously played with LeeAnn Greenauer as PhiLeep, coming close on several occasions in previous years. Josh Greenauer becomes the second player to win the tournament with two different partners, having previously won with Bob Greenauer as Dorkus Malorkus in 2005, 2007, 2008, and 2009. He ties Eric Klavoon in all-time KanJam Klassic titles with five.

Ties decided by head-to-head play.
The top 8 teams from this division qualified for the playoffs.

Ties decided by head-to-head play.
The top 8 teams from this division qualified for the playoffs.

For the first time ever in the KanJam Klassic, the field of teams was split up into two divisions for the regular season. On one half of the field was the Dinger Division (Red) and the other half was the Deuce Division (Yellow), each comprised of 16 teams each. In addition, this was the first time the regular season featured full games to 21 points, due to the lower number of teams to play and the talent of the teams. In fact, in all, the tournament featured eight former KanJam World Champion players, five more World Champion runners-up, and four more who reached the Final 4 in the World Championship. Not to mention, all five KanJam Klassic Champions were present, six more players were runners-up in the Klassic, and four more had made it to the Final 4 in the KanJam Klassic. An incredible lineup of teams to say the least.

Without a question, the highlight game from the regular season was between the defending Klassic champs, Rebel Survivors, and The Italian Stallions in the Deuce Division. After matching points and going into overtime, both teams matched double buckets for six straight rounds in overtime. Eventually, Rebel Survivors won the game in the 7th overtime round, 6-4. Although this matched a tournament record for the longest game, believe it or not it wouldn't be the only 7-overtime round game for this tournament. More on that later... 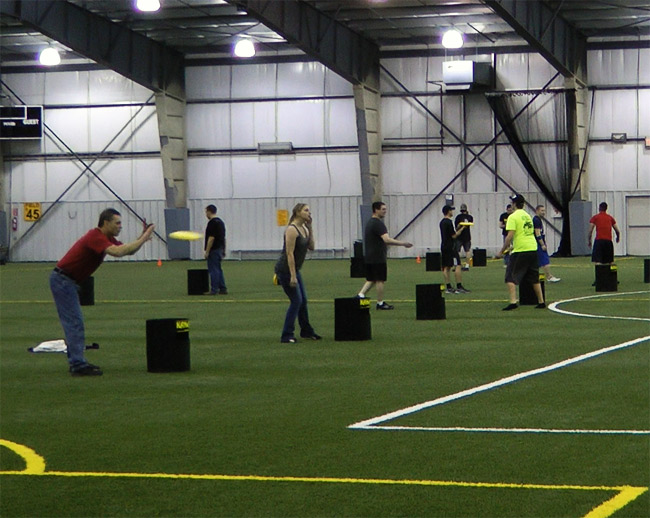 With conclusion of the regular season, all teams handed in their folders and teams were ranked on a basis of total wins and head-to-head record for ties. The top eight teams from each 16-team division made the playoffs. In the Dinger Division, No Big Deal dominated with a record of 15-1 for the top seed. PHILorkus (13-3), Skillz That Killz (13-3), and Those Polish Guys (12-4) were the other top teams in this division. To prove how competitive this tournament was, former KanJam World Champions, Team Domination, just barely missed the playoffs, tying in record at 9-7 with Sweaty Bear but losing the head-to-head matchup.

In the Deuce Division, it was even tougher to make the playoffs. The top five teams all tied in record at 12-4. Looking at the head-to-head records between the teams, Slackers claimed the top seed, with Rebel Survivors (#2), More Like Kan't Jam (#3), The Italian Stallions (#4), and The Hammer Bros (#5) behind them. The last playoff spot (#8 seed, Six It) made it with a 10-6 record. Only two wins separated all eight playoff teams from this division.

In a format similar to the World Championship, a playoff bracket was set up within each division, with the top seed playing the bottom seed throughout the playoffs. Once it was down to each Divisional winner, the Finals would feature the top team from each division squaring off for the title. For this tournament, all playoff series were best-of-7 series. 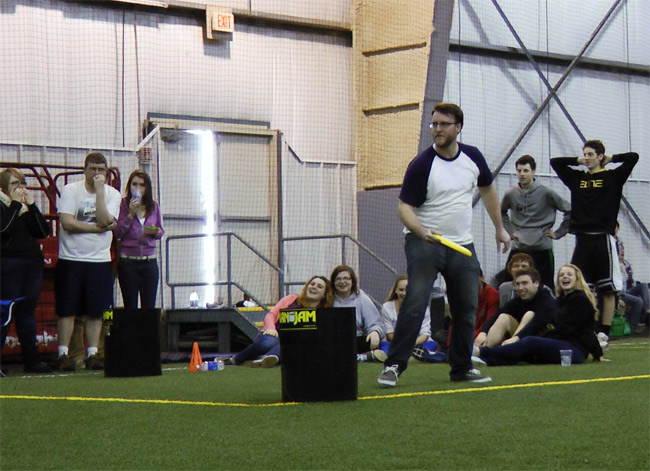 Divisional Semi-Finals (best of 7) - Both top seeds advanced in the Dinger Division. However, it wasn't easy for #1 seed, No Big Deal. After getting out to a commanding 3-0 series lead, Those Polish Guys bounced back to make it interesting, winning the next three games to force a deciding game 7. In game 7, both teams battled their way into overtime. The game extended into triple overtime before No Big Deal eventually won. Those Polish Guys came incredibly close to pulling off a major comeback. PHILorkus continued their hot streak, eliminating Skillz That Killz, 4-0.

While the top seeds remained in the Dinger Division, that wasn't the case in the Deuce Division. In fact, both the #1 and #2 seeds were knocked out in the Divisional Semi-Finals. After getting out to a series lead over Slackers (#1), Jon Sandino from The Italian Stallions (#4) threw a timely Instant Win. The Italian Stallions moved on to the Final 4 for the second straight KanJam Klassic, winning the series, 4-1. In the other series, defending Klassic champs, Rebel Survivors quickly fell behind in their series, 3-1 against More Like Kan't Jam. Facing elimination, Eric Klavoon from Rebel Survivors hit a timely deuce when they needed it to stay alive late in the series. They eventually fought back to force a game 7, and ultimately went to overtime in that game. More Like Kan't Jam stayed consistent, matching perfect buckets through six overtime rounds with the defending champs. In the 7th overtime round, Rebel Survivors only scored two points, opening the door for their opponents. After being consistent throughout the entire series, More Like Kan't Jam surprisingly scored no points on their first throw. However, they made up for it with a bucket on the return throw to eliminate the defending champs and advance to the Final 4. This ended Rebel Survivors' streak of three consecutive KanJam Klassic titles. Kudos to Rebel Survivors on an incredible tournament run.

Final 4 (Divisional Finals, best of 7) - The Italian Stallions would become the winner of the Deuce Division by defeating More Like Kan't Jam, 4-1. By winning the series, they advanced to the Finals for the first time in a major KanJam tournament. 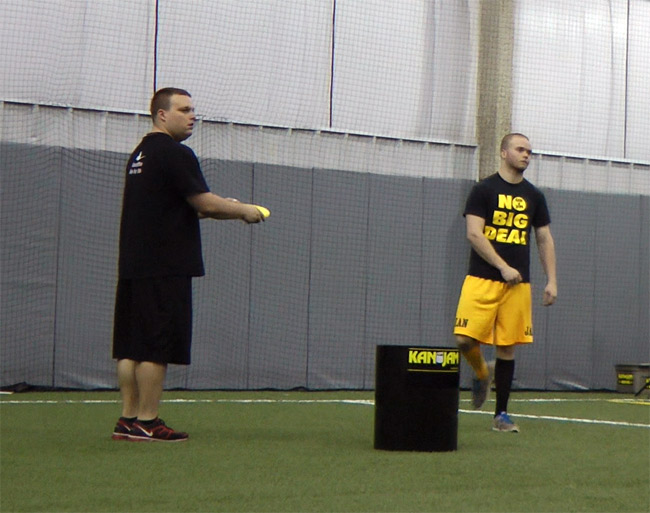 In the Dinger Division, yet another game 7 would take place to determine a winner. No Big Deal would take a 2-1 series lead by beating PHILorkus in double overtime in game 3. PHILorkus bounced back to win game 4, tying the series at 2-2. After both teams were perfect to 21 in a crucial game 5, PHILorkus scored six points in the first overtime round. With just a single point on their first throw, No Big Deal attempted an Instant Win shot but was unsuccessful, which resulted in a 3-2 series lead for PHILorkus. With a score of 16-16 in game 6, PHILorkus failed to convert a five-point round. Shane Nelson from No Big Deal nailed to deuce on the return throw to win game 6, forcing game 7. Once again, both teams were locked at a score of 16-16 in the final game. This time, neither team could convert the five-point round, sending game 7 to overtime. After No Big Deal scored four points, PHILorkus shot six points to win the series, propelling them into the Finals. As a team, this is the first Finals appearance for PHILorkus; individually, they each made it to the Finals of the Klassic in years past with their previous partners. 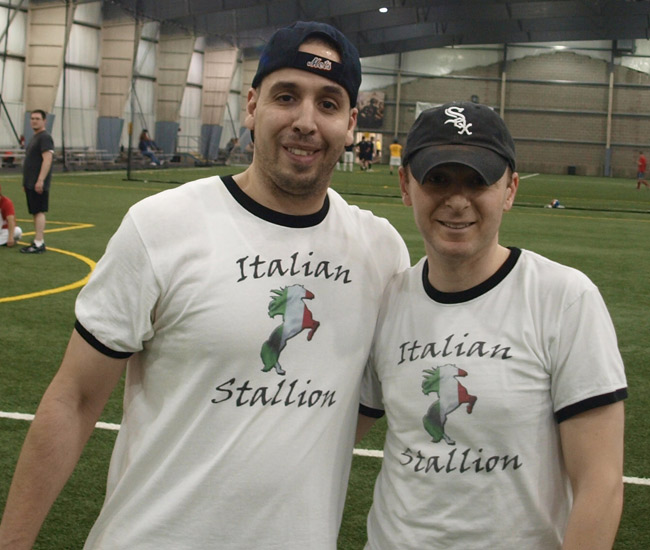 The Finals featured Dinger Division winner, PHILorkus (#2 seed) going up against Deuce Division winner, The Italian Stallions (#4 seed). With already three game 7 matches in the playoffs, it would only be fitting for the Finals to go to a deciding game 7. The Italian Stallions dominated in the early stage of this series. After winning game 1 in double overtime, they continued a streak of 28 consecutive buckets from the end the first game to the beginning of game 4. That includes the first three games all going to double overtime. The Italian Stallions won all three games to take a commanding 3-0 lead with just one win separating them from the crown. But PHILorkus did not give in that easily, throwing a perfect game of their own in game 4 and winning game 5 in double overtime to bring the series in reach at 3-2. In game 6, PHILorkus shot another perfect game, tying the series at 3-3 and ultimately setting the stage for a game 7 to determine who would walk away as Klassic champs.

In the final game, both teams matched perfect buckets through the first three rounds. PHILorkus closed out, tossing perfect again. On the first throw by Italian Stallions, only one point was scored, and they needed a deuce in order to force overtime. Unable to hit to goal on the return throw, PHILorkus celebrated their epic comeback in winning the 2013 KanJam Klassic. It was certainly a Finals to remember, featuring five perfect games by both teams out of the seven games, which includes those that went to overtime. Also, four of the seven games went to double overtime rounds. In addition to Italian Stallions' streak of buckets, PHILorkus shot 19 consecutive buckets from the end of game 5 through game 7. They are only the second team to ever win a playoff series after trailing three games to none (Milo's Minions did it in 2011). It was certainly a great finish to the 10th annual tournament! Hats off to a great display of KanJam in the Finals by both PHILorkus and The Italian Stallions.

Thanks goes out to the staff at the Sahlen Sports Park for setting up the rental and to all the participating teams. Also, thanks to those that helped with setup, take down, and helping run the tournament. Special thanks to Scott Silverman, who did a fantastic job with tournament announcements, playoff seedings, and raffle announcements. Congratulations to all the random prize winners below:

Second Drawing (after completion of Finals):

Also, congratulations to all players that made it to the Final 4, who were also awarded with prizes.

As in years past, proceeds from the tournament were donated to "Carly's Club" at Roswell Park Cancer Institute. Visit www.carlysclub.org for more information regarding this charity. We look forward to next year's Klassic! Until next time...