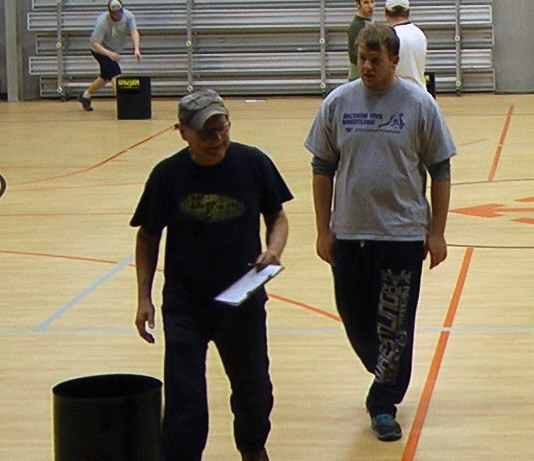 Bob Greenauer & Shane Nelson and Eric Klavoon & Phil Schneider both finished Week 4 with a 14-2 record. Both teams also split their series against each other, setting up a tiebreaker game to determine first place. Bob & Shane won the tiebreaker game, vaulting them ahead for first place in the last league night of 2012. In third place was TJ Burns & Josh Greenauer at 12-4 and one win behind them was Adam Williams & Brian Ellis at 11-5 in fourth place.

TJ & Josh lead the league with two perfect games, having thrown them in consecutive games against Adam & Brian E. Other perfect games were thrown by Eric & Phil (1) and Dana Miseheimer & Matt Nelson (1).

Kim and Scott played in the most overtime games this week. Exactly half of their 16 games played went to overtime, posting a 5-3 OT record.

The chase for the league title gets closer, as only one point separates the top three players. Jon Sandino and Eric Klavoon are now tied in total points with 84; however, Jon has one more win than Eric to lead the league in the overall standings. Right behind Jon and Eric is Josh Greenauer with 83 points and Matt Nelson close behind in 4th place at 79 points. Brian Ellis stays strong at 5th place with 72 points.