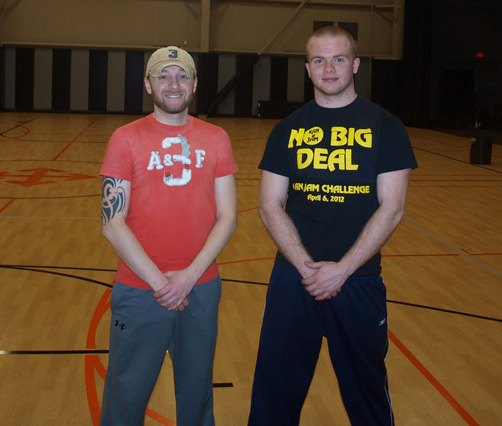 Close battle for first ends with Jon & Matt on top

After finishing the week with a record of 13-3, Jon Sandino & Matt Nelson had to wait to see where they would stand. Two teams were locked at 11-3 heading into their last two-game series, which happened to be against each other; Eric Klavoon & Brian Ellis took on Bob Greenauer & Scott Silverman. With a head-to-head win against Bob & Scott, Jon & Matt needed Eric & Brian to lose at least one of the two remaining games. After winning the first game, Eric & Brian went into overtime in the second game against Bob & Scott. However, they lost the last game in overtime, propelling Jon & Matt into first place in Week 8. The first place finish marked the third for Jon and first for Matt this season.

Just one Instant Win was thrown this week, and it was tossed by Alex Reinecke, while trailing in a game by a score of 4 to 12. This was Alex's third Instant Win of the season, tying him with Brian Schultz and Shane Nelson for the league lead this season.

There were two ties in record. After splitting their final series against each other, Bob & Scott and Eric & Brian both tied at 12-4, setting up a tiebreaker game. In the tiebreaker, Bob & Scott shot perfect; however, Eric & Brian kept pace, just missing one throw, but tying the game to go to overtime. In overtime, Eric & Brian won by a score of 6-4 to secure a second place finish. The other tie was between Alex & Derek and Brian S & Kenny. This tie for 6th place was won by Alex & Derek, winning both games in their two-game series against their counterparts. Also, after some tough key losses, Josh & Tim barely missed the opportunity to set up a four-way tie at 12-4 for first place, ending the week in fourth place at 10-6. Eric & Brian also lost a potential 5th perfect game earlier in the night when the last throw was tipped in and bounced out. The game eventually went to overtime where Dana & Shane would beat them.

The longest game actually happened to be the first game of the night between Josh & Tim and Dana & Shane. The game went to five overtime rounds before it was won by Josh & Tim. Bob & Scott and Josh & Tim played in seven overtime games to lead the league this week. For the season, Josh Greenauer and Brian Ellis are tied for the most overtime games played at 43.

As another side note, Eric got just enough wins this week to reach 100 wins yet again and has now done it in all eight seasons of the league. Several other players, including Matt, Josh, Brian E, Jon, Bob G, Shane, Dana, Scott, Adam, and TJ, all have the opportunity to reach 100 wins this season. With three weeks left, it will interesting to see who else will get to 100 wins. Matt is the next closest, sitting at 93 wins with three weeks left.

With the Week 8 results in the books, the "drop week" has been added in. This means that each player has their lowest points for a single week "dropped" from the overall standings. All other stats (wins, losses, etc) are still included in the standings, only the points are adjusted. Eric Klavoon expands his lead to 19 points over Matt Nelson (2nd place) in the overall standings. Jon Sandino jumps ahead to 3rd place, trailing Matt by just five points, while Josh Greenauer holds a seven point lead over Brian Ellis for 4th place overall.