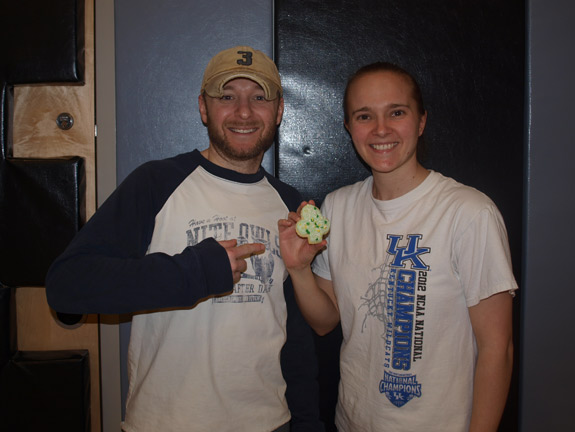 With over half of their games going to overtime, Jon Sandino & Sarah Burns won enough of those close games to finish with a 12-4 record, tying with Josh Greenauer & Scott Silverman. Having won both games against Josh & Scott in overtime, Jon & Sarah won the head-to-head matchup to lock up first place in Week 10. This is the fourth first-place finish for Jon and first for Sarah this season. Close behind in third place was TJ Burns & Bob Greenauer at 11-5 and Matt Nelson & Derek Schultz in fourth place at 10-6.

There were a ton of perfect games tossed this week by a total of seven different teams. Leading the league was TJ & Bob with four perfect games. The second place team of Josh & Scott tossed three perfect games (including two in a row at one point), and Kenny Campbell & Phil Schneider threw two perfect games. Four other teams all tossed one perfect game, and they were: Jon & Sarah, Matt & Derek, Kim Daugherty & Alex Reinecke, and Tim Klavoon & Bob Bowers.

Just one Instant Win was thrown this week, and it was by Travis Torrey in a game against Adam Williams & Gavin Williams.

In the overall standings, Eric Klavoon has a large enough lead to lock up the 2012-2013 league title, now having won the league for the 5th consecutive year and 6th time overall in the 8-year history of the league. With one week left, there is still a very close battle for second place. Josh Greenauer and Matt Nelson are tied in points at 177, with Jon Sandino behind them by only two points. Since Josh played one more week than Matt, head-to-head record is the tiebreaker. Right now, Josh has a 9-6 record in games against Matt this season, putting him ahead in second place. Like Eric, Josh still has his drop week to use if needbe in the final week, but he doesn't have a large enough lead to lock it up. It will come down to the final week to determine which of these three players will secure the runner-up spot in the overall standings this season. After a strong week, Bob Greenauer, moves up into the top five, holding a five-point lead over Scott Silverman and seven point lead over Brian Ellis for 5th place overall.

Three more players have joined the 100-win club along with Eric. Josh Greenauer has 111 wins, marking the 7th time he has finished with 100 or more victories. In doing so, Josh is also a manageable 11 wins shy in the final week to record his 1,000th league win to join Eric Klavoon who achieved this milestone earlier this season. In addition to Eric and Josh, Matt Nelson records his second straight 100+ season and Jon Sandino hits this mark for the first time.