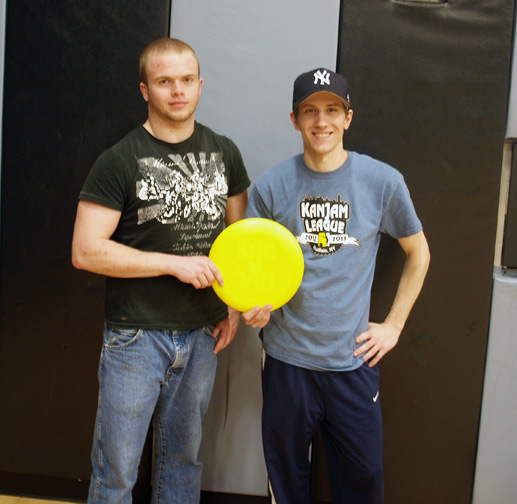 Matt and Eric are the top team in the final week

In a fitting way to end the season, Matt Nelson & Eric Klavoon got paired, going 13-3 to take first place in the final week of the 2012-2013 season. This was Eric's record-tying 7th first place finish this season and second for Matt. With first place already locked up in the overall standings by Eric, the final week was a battle between Josh Greenauer, Matt Nelson, and Jon Sandino, with just two points separating these players for second place overall. Tim Klavoon & Jon Sandino (11-5) won their head-to-head battle against Phil Schneider & Scott Silverman (11-5) to take second place, while Shane Nelson & Derek Schultz (10-6) won their series against Bob Greenauer & Josh Greenauer (10-6) to take fourth place.

The longest game of the night took place between Adam Williams & Kenny Campbell and Bob Bowers & Brian Ellis. It took five overtime rounds to decide the winner of the second game of their series, with Adam & Kenny eventually winning the game. Every team played in at least one overtime game this week. The top teams in overtime were Matt & Eric (4-1) and Shane & Derek (4-1).

Also, there was one final tiebreaker game held to determine sixth place, and it was won by Adam & Kenny (9-7) against Dana & Kim (9-7).

There were a total of three random prize drawings for the final week. The winners each won a $15 gift card and they were: Adam Williams (Wal-Mart), Tim Klavoon (Taco Bell), and Josh Greenauer (Mighty Taco).