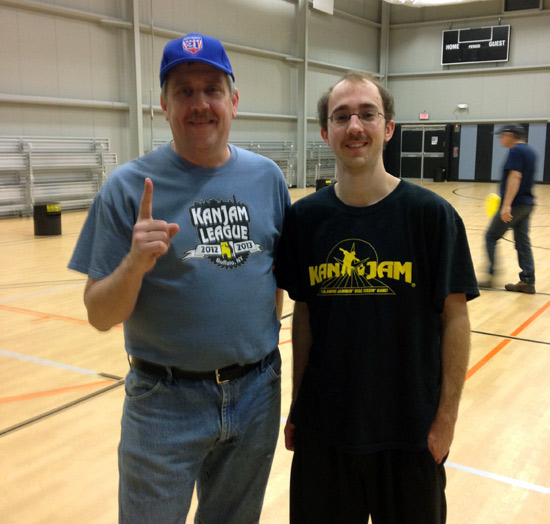 The 9th season of the Buffalo, NY indoor KanJam League is underway! Tim Klavoon & Alex Reinecke beat out a closely knit field of teams separated by just a couple of wins. They finished the night at 11-5. Close behind them were TJ Burns & Brian Ellis, ending the night at 10-6. They won their head-to-head matchup against last seasons' League champion and runner-up, Eric Klavoon & Matt Nelson, who had also ended the night with a 10-6 record. In 4th place was Phil Schneider & Brian Schultz at 9-7, including a 5-1 record in overtime.

Three teams tied with a record of 8-8, with head-to-head play determining the tiebreaker. On the top of this group was Josh Greenauer & Derek Schultz, with Sarah Burns & Dana Misenheimer and Kenny Campbell & Bob Greenauer behind them. Also, after notching his first win of the season, Josh Greenauer has officially recorded his 1000th league win, joining Eric Klavoon as the only two players to reach this milestone. Bob Greenauer is also just 44 wins away from this milestone, and could reach it later this season as well.

For the first time ever, perfect games will now count for games that extend in overtime, as long as a team continues to throw only Buckets with no misses. As a new giveaway, the first team to throw a perfect game that goes into overtime will receive a $15 gift card of their choice, one for each player. This of course would require both teams competing to play extremely well in order to send the game into overtime while being perfect. While there were some close games, including one that actually went to overtime, no team was able to keep the perfect game intact, so the gift cards will still be up for grabs in Week 2.

The league also welcomes newcomers Josh Bewley and Jim Englert, who competed in their first every league night. They paired up for Week 1 and will join the random draw for Week 2. Other returning players not present for Week 1 will join the action when the league continues on Week 2.

There were two random prizes given away to kick off the new season. The $15 gift card prize was won by Brian Schultz (Mighty Taco) and the KanJam mini game set prize was won by Phil Schneider.