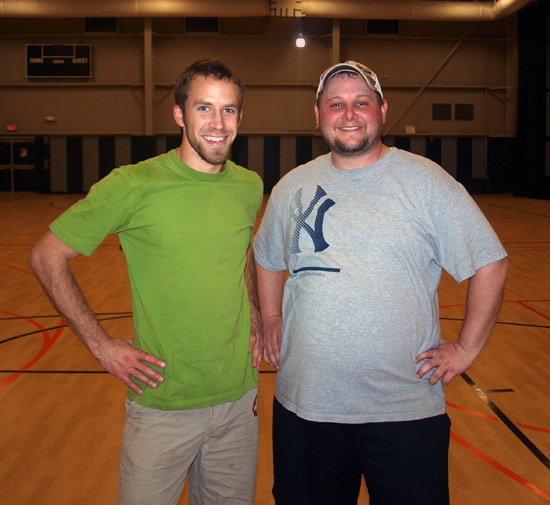 Ending the night on Week 2 with a 13-3 record, Josh Greenauer & TJ Burns took first place. Their performance also included a perfect 3-0 in overtime an astounding five perfect games thrown. In second place was Kim Daugherty & Phil Schneider, at 12-4, with Sarah Burns & Jon Sandino behind them in third place at 11-5.

In the middle of the pack, five teams were all separated by just win. Matt Nelson & Derek Schultz won their head-to-head matchup against Eric Klavoon & Bob Bowers to take 4th place. And for the second straight week, three teams tied at 8-8, with Bob Greenauer & Tim Klavoon at the top of that group.

In Week 2, all 11 teams played at least one overtime game, including Chris Meyers & Adam Williams who won their only overtime game played toward the end of the night. The top three teams posted a combined overtime record of 9-1. The most overtime games played was seven, and this was by both Matt & Derek and Bob G & Tim.

For the random prize drawing, Scott Silverman did the incredible feat of drawing his own name to win his choice of a $15 gift card. To no surprise, Scott also chose a Applebees gift card.

For fun, six players were able to achieve an incredible feat. Setting up six goals in a hexagon shape, each player would toss the disc to someone else 50 feet away while deflecting an incoming throw from their "partner" at the same time. After several attempts, a 18-pack was completed at the same time. This was done by TJ Burns, Adam Williams, Josh Greenauer, Eric Klavoon, Scott Silverman, and Bob Greenauer.

In the overall standings, TJ Burns climbs into the number one spot overall for the first time, holding a five point lead over both Phil Schneider and Josh Greenauer, who are tied for second. Tim Klavoon & Matt Nelson are tied for fourth place, and are part of a group that consists of five players that all have a 19-13 record after two weeks. With just a couple of points separating players, it is shaping up to be a back-and-forth battle with everyone having a chance to move up the ladder at anytime.