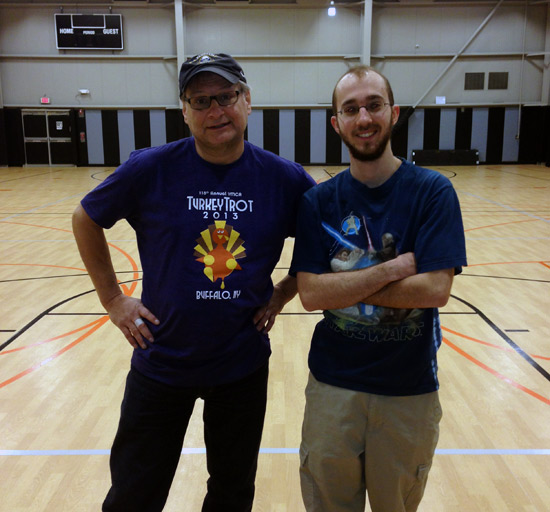 Bob Greenauer and Alex Reinecke won the head-to-head battle against Jon Sandino & Adam Williams to take first place. Both teams finished at 12-4 on the night. For Alex, it is his second first place finish so far this season. In third place was Eric Klavoon & Josh Greenauer at 9-7, with all their losses coming in overtime. For certain, it was a competitive night decided largely in part by overtime performance.

Every team competed in at least six overtime games. Both Bob G & Alex and Eric & Josh G set a new league record of 11 overtime games played in a single league night. The previous record was 10 overtime games played in a single night, and this was done a few times in seasons past. Bob G & Alex's 8-3 overtime record proved to be the difference in securing first place. Jon & Adam also put up impressive overtime numbers, with a record of 7-2 in overtime games. In many matches on the night, the overtime games took several rounds to determine a winner. The longest was won by Dan Klavoon & Derek Schultz in a game against Brian Ellis & Tim Klavoon. That game took five overtime rounds to decide a winner. Some three-game series had all three games go to overtime, including some with multiple overtime rounds.

While there were no Instant Wins thrown, two teams tossed perfect games. Both Eric & Josh G and Dana Misenheimer & Kim Daugherty each threw two perfect games. In doing so, Eric raises his season total to 13 perfect games thrown, leading the league in that category.

As an interesting note, Bob Greenauer is just four wins shy of joining Eric Klavoon and Josh Greenauer to reach 1,000 wins in league play since the league began back in 2005.

In the overall standings, only five points separate the top five players. Josh Greenauer (#1) and Eric Klavoon (#2) moved up into the top spots. Josh (82) holds a four point lead over Eric (78). In third place is Tim Klavoon, who is tied with Eric in points at 78. Tim takes the next spot down due to a one-win differential (tiebreaker). Bob Greenauer is tied in points with Matt Nelson for fourth place with 77 points.