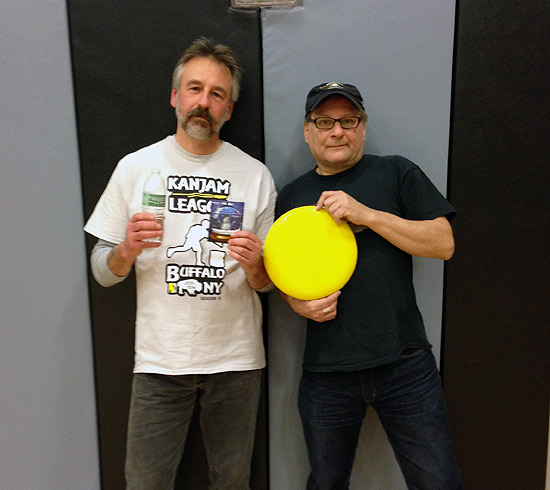 For the second straight week, Bob Greenauer finished in first place, this time with Dana Misenheimer as his partner. He also reached a milestone of 1,000 league wins, joining Eric Klavoon and Josh Greenauer as the only members to reach that total since the league began back in 2005. For Dana, this was the first top finish this season for the veteran, breaking an unbelievably consistent start to the season, having went 8-8 in each of the first five weeks. Dana & Bob tied in record with Eric Klavoon & Kim Daugherty at 12-4, but they won the series against Eric & Kim to take the first place spot. Both teams also led the league with a 5-1 record in overtime.

In third place was the team of Josh Greenauer & Scott Silverman, who have made themselves known as "Kosher Beef." They ended the night at 10-6. And due to ties in head-to-head play, there were two tiebreaker games that were played this week. Tim Klavoon & Phil Schneider (9-7) beat Brian Schultz & Adam Williams (9-7) in their tiebreaker game to take the fourth place spot while Jon Sandino & Derek Schultz (8-8) defeated TJ Burns & Alex Reinecke (8-8) for sixth place.

Oddly enough, this the second time someone drew their own name for the random prize drawing. Dana Misenheimer won a $15 gift card to Wal-Mart. This also happens to be the second time Dana has finished in first place and won a gift card in the same week, having done so last season as well.

Things are really getting interesting in the overall standings. Josh Greenauer (99) stays on top, just one point ahead of Bob Greenauer and Eric Klavoon, who are both tied in points for second place (98). In addition to just one point separating these three players for first place overall, all three players have the exact same win-loss record of 60-36. In fourth place is Tim Klavoon with 93 points and Dana Misenheimer moves up into fifth place with 84 points.