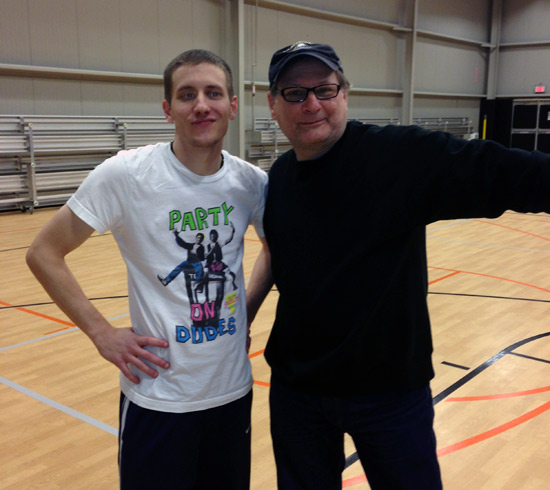 After finishing the night with a hard fought, four-overtime round win against Josh Greenauer & Alex Reinecke, Eric Klavoon & Bob Greenauer ended with a record of 11-5. That would hold up good enough for first place, beating out Jon Sandino & Brian Schultz (10-6) and Matt Nelson & Phil Schneider (10-6) to take the top spot. This is the third first place finish for both Eric and Bob this season. For Eric, it is his second week in a row with a first place finish, and for Bob, his third first place finish in the last four weeks.

The Instant Win drought was broken, when Scott Silverman threw a slot shot for the win in a game against Matt & Phil. This is the first Instant Win thrown in the last four weeks of league. It proved to be important, ultimately making a difference between first place and third place for Matt & Phil.

Leading the league in perfect games in Week 8 was Matt & Phil, who threw four perfect games, and at one point, had a streak of nearly 20 straight Buckets. Other teams to throw perfect games were: Jon & Brian (3), Eric & Bob (1), and Kim Daugherty & Scott Silverman (1). For Eric, he recorded his 23rd perfect game of the season, officially setting a new league record for the most in a single season.

The random prize drawing was won by Bob Greenauer, winning a $15 gift card to Subway.

In the overall standings, the drop weeks have been calculated in. Leading the league is Eric Klavoon with 128 points, holding an 11-point lead with three weeks left. Bob Greenauer moves up into second place with 117 points, and Josh Greenauer is just one point behind him with 116 points for third. In fact, Bob and Josh have the same exact record of 79-49, and also have both thrown nine perfect games. Even with missing two weeks, TJ Burns moves up into fourth place with 100 points. Dana Misenheimer and Matt Nelson are tied with 98 points for fifth place. Also, there is actually just a one-point differential between places 8-12, so the race to land a spot in the top ten heats up.