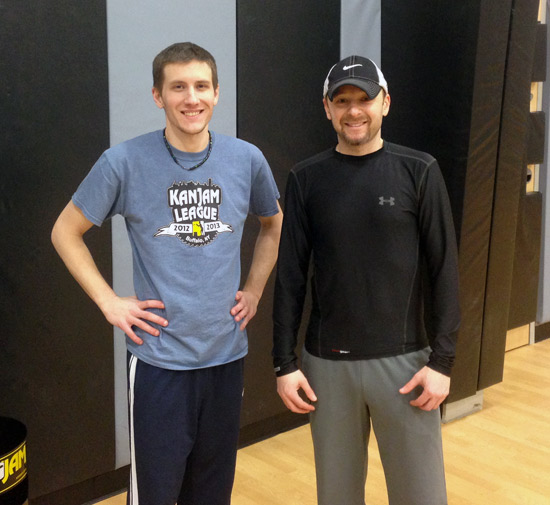 For only the fifth time ever and first time since season two, only six teams competed in a league night. However, this made for some interesting series. For the first time, a four game series would kick off the night for each team. Eric Klavoon & Jon Sandino took first place at 13-3. This was Jon's first top finish of the season and the fourth for Eric. Jon also was the winner of the random prize for Week 10, winning a $15 gift card to Wegmans. Coincidentally, this is the fifth week in a row that a player who finished in first place also took home the weekly random prize as well.

Six teams is the lowest total of teams that ever competed in a single league night. Although the number was low, it actually set up a nice schedule of games for the night. With an even amount of teams, every team had a set schedule to follow, starting with a four-game set. After that, all remaining series were three-game sets.

The next best team was Adam Williams & Scott Silverman for second place with a 10-6 record and Alex Reinecke & Phil Schneider to follow at 9-7 for third place. There was a tie at 8-8 between Brian Schultz & Derek Schultz and Dana Misenheimer & Josh Greenauer, but Brian & Derek won the head-to-head matchup to lock up fourth place.

Interestingly enough, only a total of two perfect games were thrown. They were thrown by Adam & Scott and Dana & Josh. Once again, no Instant Wins were tossed.

In overtime games, Eric & Jon shined with a record of 5-1, ultimately making the difference for them in terms of placement. With longer series, there also were many games that went to multiple overtime rounds. The longest game of the night was between Eric & Jon and Alex & Phil. Eric & Jon eventually won the game in the fourth overtime round.

With just one week left, Eric Klavoon has a large enough lead with the drop week to lock up his 6th consecutive league title. Josh Greenauer just about has second place locked up as well. They are actually the only players that will be able to post 100 wins or more this season. For Eric, he has already hit that mark with 110 wins (100 wins or more in all nine seasons) and for Josh, he is just one win shy (99 wins) in hitting 100 again this season. Bob Greenauer remains in third place with 134 points. The battle for remaining two top five spots is still up for grabs. Only three points separate 4th through 7th in the overall standings. Scott Silverman has moved all the way up to 4th place (118) and TJ Burns is in 5th at 117 points. Below them are Alex Reinecke and Dana Misenheimer, who both have 115 points. It will make for a fun end to the season.